This presentation by Thomas Griffiths, Planner at DigitasLBi is great for all brand strategists. I particularly like the idea and heart of his talk that brands should give the control back to the people in the conversations we have with them. He describes the development of tight, closed communities. the brand becomes shattered in these diverse groups and that’s okay. Let the consumer work it out for themselves.

Looks at answering what the role of a Digital Strategist is in an Advertising Agency. A relative of the Communications Planner, Strategic Planner and Account Planner, Digital Strategy concentrates on understanding the digital consumer, brand, media and creativity.

Looking at the core skills of Insight Mining, Communication Planning and Digital Metrics for success.

Thanks to Mark Pollard, Ana Andjelic, Mike Arauz and the many other Digital Strategists.

This is a presentation from the online course ‘Crash Course to Digital Strategy’ that you can sign up to on Skillshare for $20 http://skl.sh/VOj2ol. See on slideshare for more interesting presentations on Strategy and Ideas.

How do you ignite your ambassadors and the makers of things?

Author Helge Tennø, currently working as Digital Director at Dinamo AS in Oslo, Norway, is  an inspiring personality. And he creates insightful presentations. In his work he helps companies and organizations discover WHY they are valuable in consumers lives, and HOW they can create deliberate value on the everyday arenas where they connect with them

This is video is so great. 9 year old Caine spent his summer building an elaborate cardboard arcade inside his dad’s used auto part store.

Nick Mullick, a filmmaker, discovered the homemade arcade when he stopped into Caine’s dad’s auto parts store. He asked Caine’s father, George, if he could make a film about the arcade. “Well, actually, it’s kind of like a joke around here because you are his only customer,” he says in the film. Well, Mullick changed all that.

The heartwarming 11-minute film got a combined 3.5 million views on Vimeo and YouTube in just four days. That led to hundreds of online articles about the video, which led to television stories about the cardboard arcade by Fox, NBC and CNN. Source: LATimes.

And the best thing is, Caine inspired a lot of other children over the world. Now global play day is initiated by imagination to find, foster & fund creativity & entrepreneurship in more kids. See second video and read more on http://cardboardchallenge.com

Principles of Behavioural Economics for Marketing. A nice summary. 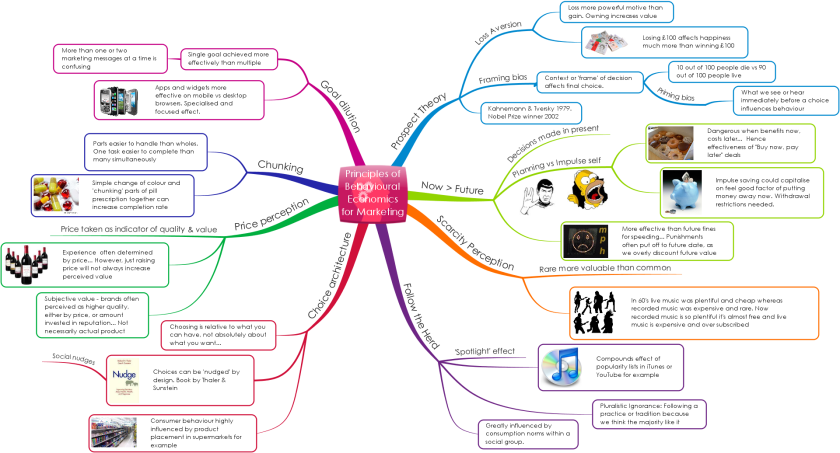